Family games you can play during (and after) lockdown

The line between work and home life is blurred. Most of us are working from home. Some are home-schooling at the same time. Rather than write yet another work-related article, I’ve written about some of the games I’ve devised over the years for my own family and friends. I hope some of them inspire you too.

Teenagers often want money as a present – but I make them earn it. Here are some ideas. As you’ll see, the first two are inspired by TV shows, the third by a children’s game:

Deal or no deal

Wrap each separate amount in a tissue (so it can’t be identified by weight/touch) and put it in an envelope. Shuffle the envelopes so you don’t know which is which, and number them 1 to 11 (or 12). Make a list of the denominations on a piece of paper so you can cross them out in turn.

The game is played a bit like the TV game, with you as ‘the banker’. Here are the official instructions.

In my version, the player picks one envelope to keep, but they can’t open it yet so they don’t know how much is in it.

In each round, they get to choose one other envelope and open it, meanwhile you offer to buy theirs back from them (work out an amount halfway between the amounts still on the table).

Unless they accept one of your offers ‘take your deal’, they will end up with a choice of two envelopes. They can swap or stick with the first envelope they picked.

The amount they win is in the final envelope that’s opened.

I played this with with my older nephew. The two amounts he was left with were £20 and 2p. He picked the 2p envelope. Despite me being perfectly willing to give him the £20, he insisted on keeping the 2p “because that was his present”.

Who wants to be a millionaire

As above, you need to collect a coin or note of each denomination that add up to the maximum you’d be willing to give away.

Ask the player to pick a page number, and then a question number.

If they get the answer right, they win 1p. Hand it over.

The money goes up in increasing increments for each question.

If stuck, they have three lifelines.

Keep playing until they get an answer wrong and then award them the amount they’ve won so far.

We played this one year with my older nephew. The rest of the family couldn’t resist joining in to help him.

Wrap a parcel with the main present in the middle. For each layer, print out a challenge on A4 paper folded inside an envelope. On the outside of each envelope, write instructions e.g. ‘You can’t open the next layer until you’ve solved the puzzle inside’.

Pick challenges that are age-appropriate, not impossible, and likely to be enjoyed by the recipient. It’s supposed to be fun and not too much like hard work.

I did this with my younger nephew who was in a really bad mood when we started, but who couldn’t help himself smiling as the game went on.

This game was inspired by Cluedo but shouldn’t be called that due to licensing issues.

It works if your family are all in the same house together, and assumes everyone has bought a chocolate egg for the child of the household.

Everyone hides in a different room with their egg.

Write the name of each person on a separate index card, or design and print special cards, each showing one of their headshots.

Start at the front door with the child. Get them to pick a card. Their task is to go round the house to find that person and get their egg before picking another card and finding the next person.

You roll a dice and the child can only take that many steps. Then you roll again.

You roll another four, and they walk back out of the room. Daddy stays where he is. Keep rolling the dice as the child searches upstairs, eventually finds Nanna in one of the bedrooms, gets her egg, and then picks the next card. It’s their brother. Having searched upstairs, they finally find him in the kitchen, then pick the Daddy card and go back to the dining room.

It’s fun for all, and more engaging than simply handing over a pile of eggs all at the same time.

I invented this for my younger nephew who was obsessed with Cluedo at the time. We let him throw the dice himself, which meant he threw it as far as he could and started counting his steps from there. That’s why I recommend you keep control of the dice.

Everyone picks a word before you all listen to the Queen’s speech together. If/when she says your word, you get a point. The winner is the person with the most points at the end of the speech.

This forces all family members to listen harder to what she actually says.

No cheating! People have to pick their word before the text of the speech is leaked to the press or trailed on the radio.

Wrap a parcel with the main present in the middle. In each layer, put a retro sweet and a forfeit written on an index card. Pass it around the table between the courses of your Christmas lunch.

The person who is holding the parcel at the moment the music stops opens the layer, wins the prize, and has to do the forfeit. For example, they must sing a carol, eat a brussels sprout or tell a cracker joke before the game continues. 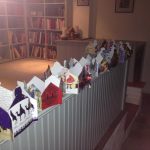 Keep the fronts of last year’s Christmas cards. Cut the top corners off to make a point. Fold the sides towards you by about 1 or 2cm.

Group the cards by content e.g. colour, theme, glitter. Staple the sides of several similar cards together to make a crown (you may need five or six depending on the width of the cards and the size of heads they need to fit).

When we did this, my youngest niece set up a ‘shop’ where people could buy the crown of their choice.

Keep the fronts of last year’s Christmas cards and cut them into random pieces. Mix them up. The task for the children of the household is to put all the cards together again.

You could set it up as a race or competition to see who makes the most. Watch out for arguments when one child has a ‘piece’ that another child wants to use.

Keep the fronts of last year’s Christmas cards and task the children to cut out and make a collage with the theme of their choice.

You’ll need to provide them with backing paper, scissors and glue.

Keep the fronts of last year’s Christmas cards and cut out the most interesting section of each. A close-up of a robin, say. Or the row of three Kings. Or the ‘Merry Christmas’ wording.

Punch a hole in the corner of each tag and thread through a piece of gift string or ribbon. Use them to adorn your presents.

In advance, encourage the children to think of a character they’d like to play. Maybe they can even bring their own costume. Working together with them, create a storyboard that incorporates all the characters. Scout around the house and garden to choose locations for the shoot. Rehearse them.

Film them on your smartphone or tablet (holding it landscape not portrait). Reshoot as necessary. Edit the video using iMovie or Splice (Apple apps). Screencast it to the big TV so the adults can enjoy the performance. Maybe edit an out-takes reel too.

This is the same as Victorian children doing a Christmas play for the adults, but with added technology (which appeals to the children of today). 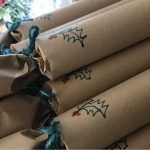 We’re a big family, and usually more than 15 of us get together at Christmas. Each person has at least one ‘job’ to help the host and hostess. One of my jobs is to provide the crackers. Although you can buy excellent crackers online and in the shops, it has become a tradition for me to make my own. Some years, the crackers replace presents.

Note that you can’t open these crackers all at once by everyone crossing arms, holding one end of each cracker and pulling. Instead, each person holds their own crack, twists and pulls (they can shout ‘bang’ if they want). When the crackers are opened, there are no hats, ‘snaps’ or jokes. They are customised with items to suit the recipients.

We usually open our crackers between courses of a long Christmas Day lunch. As you’ll see, they contain so many activities that it causes a delay for clearing up to be done and for appetites to return.

Collect the insides of toilet rolls, two per person. (With at least 15 crackers to make, I often start collecting from October. Even so, I sometimes have to request extra from friends.)

Fill them with treats, gifts and games that your family will enjoy. Choose word games, number games and picture games, and ensure there is at least one challenge to suit each age group.

Choose nice Christmas wrapping paper (or brown paper and decorate it yourself). If I’ve put different gifts inside for men, women, children or specific individuals, I ensure the crackers are wrapped in different paper (or labelled).

Roll your gifts inside the A4 pages. Tuck them inside a pair toilet roll inner tubes. Ensure there’s a gap between the two tubes. It can help to stick the tubes to the paper with sticky-back tape (or a small loop of tape with the sticky side out).

Roll the wrapping paper around the tubes (you need surprisingly a small length), and seal it with a small piece of sticky tape over each tube (don’t tape across the gap between the tubes).

Scrunch the ends and tie with gift ribbon.

I then use the point of a scalpel to prick perforations through the paper along the gap between the tubes.

I’ve found that quizzes are more fun when done in teams, as this saves anyone from embarrassment. One year, I got the family into teams according to the colour of cracker they chose. Another year, it was decided by which side of the table they were sitting.

Buy prizes for the winner/s.

Just a few of the games I’ve included over the years:

This is great to entertain visitors for an hour or so, maybe leaving you at home while you wash up after lunch and prepare their tea.

Work out a walking route of a mile or two around your local area. Look for big landmarks and small details such as road signs, dates on buildings, and logos on shops. Think of tasks you can get your guests to perform. Write up directions and clues. You might want to add snippets of local history.

For example (this is about half the ‘real’ treasure trail I created near me, edited):

If you’ve invented your own family games and traditions, please add them in the comments. Thank you.

I delivered a presentation to PSA Scotland last night. They wanted a masterclass on copy that converts. After nearly 40 years as a copywriter, I could talk about it for a week! I have lots Read more…

8 principles of online engagement, as explained at the end of my interactive fun & games with PSA Yorkshire in December. Hope you find them useful. 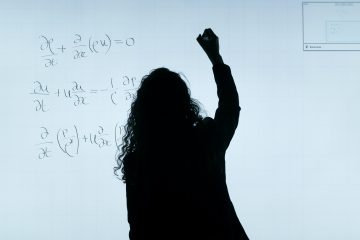 One of the highlights of Christmas is watching the Royal Institution Christmas lectures. The tradition was started by Michael Faraday in 1825 and the lectures have been shown on TV every year since 1936 (except Read more…