As seen on TV

When speakers and trainers deliver online, we’re judged against the standards people are used to in TV and film.

So, when I hosted the PSA’s weekly Coffee & Conversation meeting on 14 May, I took inspiration from TV shows to guide the agenda and try some new things.

Here’s a deconstruction of the event, including what I learned and would do differently another time.

I opened the meeting in Zoom’s immersive view alongside Jennie, my co-host, both sharing a coffeeshop background I’d found.

Top tip: Before you admit the audience, set up immersive view, choose ‘manual’, resize the images and move them around. Otherwise guests can see ‘behind the curtain’ and it looks clunky. Note that people not on the latest version of Zoom will see a black background, and Zoom doesn’t record immersive view, so if you want a recording, you’ll have to use another tool to do that.

“And I’m Jackie Barrie,” I continued. “Later, we’ll be playing a guessing game called ‘Whose Shoes’ inspired by The BusinessSpeakeasy.com.”

I changed my background to show a shoe shop.

“When we’re on stage, audience members in the front row get a good view of our shoes. But, on Zoom, we only see the top half of everybody. I’ll put my mobile number in chat. Please take a picture showing what you’re wearing on your feet, and send me the photo via WhatsApp. You might need to add me to your contacts first.”

I could see participants bending over to take photos, and the pictures were soon arriving in my WhatsApp.

Key learning: I had imagined it would be quite quick to copy the photos out of Whatsapp into the Menti quiz I’d already set up, so I didn’t do anything with them straightaway. This turned out to be a bad decision.

The spotlight was still on me. I went on: “We usually talk about your point of view. Today, we’ll talk about your actual view. Dear viewers, please raise your digital hand and Jennie will unmute you in turn to tell us what you can see outside your window.”

I changed my background to show the three windows from Playschool, and played a jingle I’d recorded: “What can you see, please tell us, what can you see?”

To set the scene, I started with what I can see from my home office (a school playground), and then invited Jennie to talk about her view.

I’d invited members of my mastermind group to record the cheesiest adverts they could, promoting any product or service they wished, and four of them kindly did. Dave Henson (The Slide Presentation Man) also made a retro rotating starburst for me. I edited most of the videos into a single MP4, and saved one for later.

To introduce this surprise, I said: “The P in PSA stands for Professional. That is, what makes a speech worth paying for. Another word for that is commercial. Online, we’re judged against TV. What happens in the middle of a TV show? Commercials. So now we’re taking a quick ad break.”

I then shared my screen to show the ads, and could see everyone laughing as much as I’d hoped – phew.

I led into the next section by thanking the contributors, explaining what I’d asked them to do, and saying: “As we all know, the ads are often better than the main programme, but let’s get back to it.”

I played the jingle I’d made: “It’s networking time,” and continued.

“We know that not everyone in the PSA has had the best year. But, in the words of Maria from the Sound of Music, ‘When the dog bites, When the bee stings, When I’m feeling sad, I simply remember my favourite things, And then I don’t feel so bad’.

It had crossed my mind to introduce this segment by playing the above snippet from YouTube, but – apart from the issue of breaking copyright – Julie Andrew’s singing and Rodgers & Hammerstein’s production values would put my own pre-recorded jingles to shame and I didn’t want to be embarrassed. 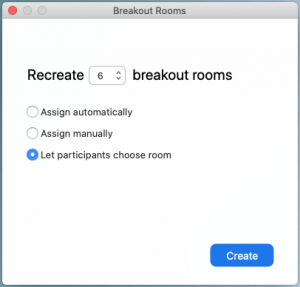 “Rather than let Zoom assign you randomly, you can choose which breakout room you’d like to join to talk for ten minutes about your favourite food, book, film, client, or travel destination. There’s also a room devoted to random chit-chat”.

I had already set up the breakout rooms and renamed them by topic. 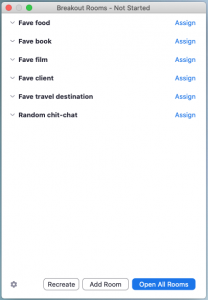 Key learning: Not every attendee knew how to choose which room to join. I realised I had to tell them to click the Breakout Rooms icon at the foot of the screen, and some had to be moved manually by Jennie and me. This took about two minutes.

This was my chance to set up the Menti quiz, and in the remaining time I managed to create five multiple-choice slides. Not enough for all the 14 photo contributions I’d received, but enough to demonstrate the game and have a bit of fun.

Once the rooms had closed, I could see people in chat were sharing their lists of favourite books with links. This provided added value later, when the Chat was saved in the C&C Facebook group.

It was now time for the quiz. I gave them the Menti.com passcode, and they had 20 seconds per slide to guess which shoes were whose. 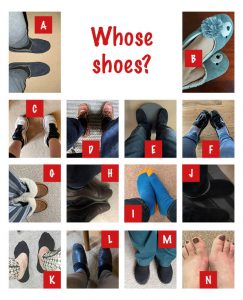 I belatedly remembered to share my screen and add a running commentary while the quiz was running. Luckily, I had also remembered to add a Leaderboard at the end to show the winner. Coincidentally, this turned out to be Jennie, who enjoyed a shower of virtual confetti thanks to the Menti graphics.

Key learning: I had set this up so quickly that I’d made a mistake about the right answer on one of the five slides. Oops. After the meeting, I created a JPG of all the images so people could play the game on Facebook if they wanted.

One of my masterminders had sent me a QVC-style ad which was about 90-seconds long.

To introduce it, I said: “You know what it’s like when you’re watching TV. Sometimes you do a bit of channel-hopping. So let’s pop over to QVC and see what’s for sale.”

I shared my screen again and played the recording. Again, I could see people laughing.

We had a few minutes before the meeting was due to end, so I flagged that up by saying:

“As professional speakers, we know the importance of ending on time,” and asked Jennie to invite participants to quickly share Any Other Business. Three of them did.

Meanwhile, I was carefully watching the clock.

Just before midday, I changed my background to a shot of the Queen Elizabeth Tower (that houses Big Ben), and played a recording of the chimes.

Fortunately, I’d timed it perfectly, and the 12 bongs rang out just as the clock turned to midday.

Most people left as the bongs were fading.

Key learnings: The audience seemed to enjoy it, but I was perhaps over-ambitious with the amount of ideas I tried to include. I did omit a couple of things – I had also planned to turn on disco lights in my home office during tone segment, and to end with a C&C jingle and logo I’d prepared. That said, no-one would know those were missing. Anyway, I hope they came away with some creative inspiration for hosting their own events, and that this case study helps you too.

Disclaimer: The actual script varied slightly from the above, which shows what we should have said, but probably didn’t.

Here’s the exposé of episode 1:

Behind the scenes at the J&J Show 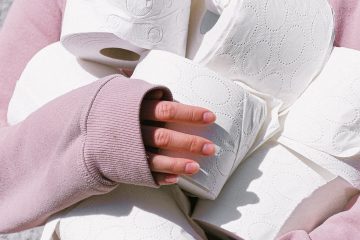 After having this book recommended to me for years, I’m finally reading “Hey, Whipple, Squeeze This” by Luke Sullivan, originally published in 1998. The sub-title is “A guide to creating great advertising” and the third Read more… 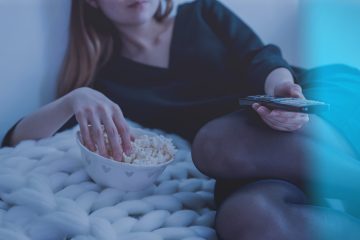 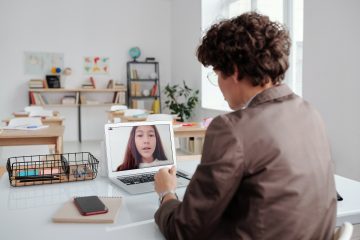 I had a thoughtful conversation with Justin Collinge, Director of Leadability. He transforms people development, creating opportunities for L&D departments and independent training companies through blended and digital learning. Among other things, we discussed: The Read more…